A panoramic view across the Kansas city’s landscape provides a mystifying enchantment when a closer look is taken among the architecture. An undeniable reason appears for the seer to pause and marvel in delight as fountains flow, providing magic for all. Information about fountains and public art in the Kansas City metro area.

FROM BEGINNING TO END

It’s our 30 years of experience that allows us to understand the various nuances of water. From inside design to finishes and maintenance, we can take on all aspects of a water feature. That’s why we offer services such as prototyping, large-scale prefabrication, consulting, engineering, design-build, and renovations. After all, we love what we do because we get to play with water everyday. 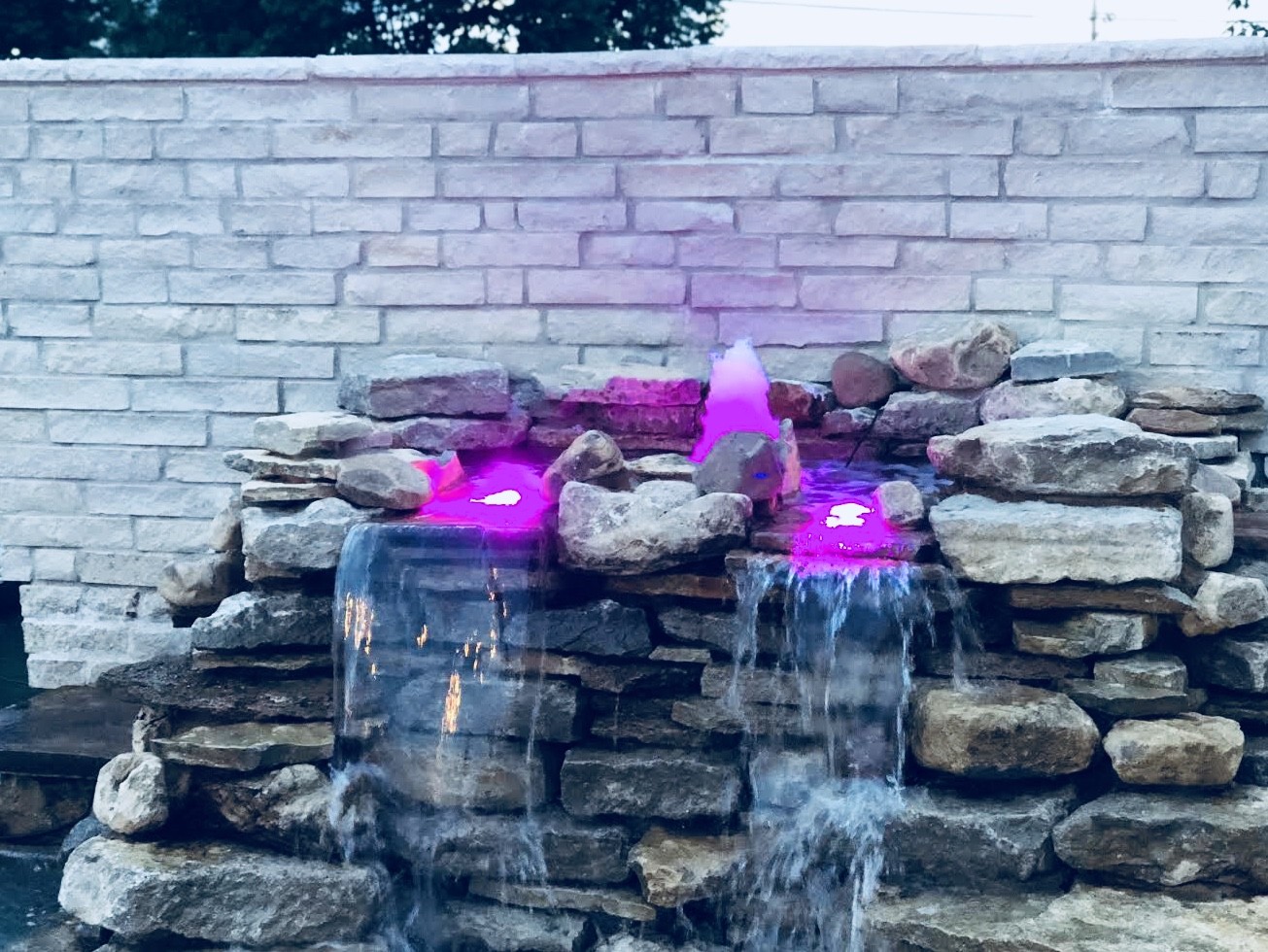 From massive public fountains to miniature private water features, many people are choosing to include a water feature in their residential or commercial landscaping design. As the premier Kansas City water feature installer THE MASONS CO is able to create wonderful water features that will amaze and captivate …

Water Features Installation and Design , serving … Parkville, Gladstone, Smithville, Liberty, MO and Kansas City, Overland Park, KS. … Fountains are a good option for people who are just looking for the sight and sound of water and don’t want a pond.

A panoramic view across the Kansas city’s landscape provides a mystifying enchantment when a closer look is taken among the architecture. An undeniable reason appears for the seer to pause and marvel in delight as fountains flow, providing magic for all.

An iconic and integral part of  Kansas City’s past, present and future is fountains. The ‘City of Fountains‘ is a name aptly bestowed upon our municipality. In 1899, the very first city-built fountain in Kansas City cost $12,000. The only city in the world to have more registered fountains is Rome, Italy.

Kansas City’s own The Masons Co., “The Keeper of the Paris of the Plains,’ is the Midwest’s premier custom fountain builder. We are proud to include KU Medical Center and Benedictine College as past clients. Having created and built fountains and water features for numerous companies, organizations and for many private residences, The Masons Co. implements the type of skilled masonry craftsmanship that is pivotal to a long-lasting fountain whose magnificence is timeless.

These craftsmen embrace delivering a unique, innovative and stunning creation to each client, that he or she will be immensely proud to own. The Masons Co. also maintains and repairs fountains and restores historic ones while maintaining each piece’s integrity and majesty.

Kansas City Masonry  / The Masons Co is revitalizing yet another majestic fountain in Kansas City!

J.C. Nichols‘ remarkable development of the Country Club residential district was unique in that he used irregular lots with shapes that were defined by curving streets that followed the terrain, instead of the usual grid plan of rectangular blocks. Landscape architect George Kessler provided a street plan that incorporated small parks and triangles into his Nichols’ ideal design.

On one of those triangular plats, the enchanting Stratford Garden Park Fountain still sits today. In 1927 the Nichols Company placed an antique Carrara marble horse trough there as the main focal point of the historic fountain.  The relic was reportedly first used in a public square in Rome. Affixed to an upright wall surface, a smaller rectangular basin is placed above it. This piece was originally used to  refresh humans waiting on their animals to drink.

Both basins are carved with ornamental fluting. Two openings in this upper basin allow water to stream into the larger trough. The water flows out of a spout in the center of the horse trough and then it is carried through a stone-lined channel approximately thirty feet to terminate in a circular reflecting pool which is six feet in diameter.

Kansas City Masonry / The Masons Company is a custom contractor that restores, repairs, preserves, designs and builds residential and commercial fountains with a passion for architecture detail and absolute function.

These historical fountain repairs are complex projects,  because they’re both works of art and works of engineering that are constantly at the mercy of mother nature. The Craft.

Feeling incomplete because of missing stones or bricks? Troubled by bowing or bulging walls? Plagued by mortar joints or vertical corner cracks?

The answer is to hire an experienced, reputable and smart Kansas City masonry company. But the answer is two-fold and the second part of the answer is to make sure that the contractor has the knowledge and esoteric masonic understanding to analyze the root cause of complex masonry problems and act accordingly.

Many masonry repairs fail prematurely because they do not address the primary cause of distress or failure. And where repairs fail, they tend to make deterioration worse. If you only fix the symptoms – that is what you see on the surface – the problem will almost certainly return, and need fixing over and over again. If you look deeper to figure out what’s causing the problem, you can fix the underlying systems and processes so that it goes away for good.

Kansas City Masonry / The Masons Co. is the region’s preeminent leader in looking deeper and determining the crucial steps in masonry repair and historic restoration.

Source: The Art of Masonry, or the Craft.

“Life is short, art long, opportunity fleeting, experience treacherous, judgment difficult.” This phrase comes from the first two lines of  Aphorismi , which was written by the Ancient Greek physician, Hippocrates. What he meant by these lines is:  “It takes a long time to acquire and perfect one’s expertise (in, say, medicine) and one has but a short time in which to do it.”

Much celebrated and most distinguished physician, scholar, and writer, Dr. Logan Clendening, was recently once again honored posthumously with a fountain on the campus of the KU Medical Center in Kansas City.

Two years after Logan Clendening’s untimely death in 1945, 600 people gathered for the dedication of a fountain which was placed in the KU Medical Center courtyard as a memorial to the prominent KU physician and benefactor of the world renowned Clendening History of Medicine Library. The interior wall of the fountain was inscribed:  “Life is Short – and the Art is Long to the memory of Logan Clendening, 1884-1945, from his friends.”

Sixty-seven years later, in 2014, the irreparable Clendening Fountain was dismantled and carefully placed in storage.

In 2016, Kansas City Masonry/ The Masons Co created, built and erected a custom fountain in front of the entrance to Murphy Hall, KU Medical’s oldest building, where the first fountain stood. The words, ‘Life is Short and the Art is Long’ is engraved into real limestone caps on the fountain. Distinctive Caduceus symbols are on each of the two columns with Scottish thistle at the top of each serpent. Custom tile adorns the fountain’s facade.

The project was a labor of pride and respect for the team. With a fierce dedication to the art of masonry and a passion for the craft’s beauty, the company took it as a tremendous privilege to have a hand in honoring Dr. Clendening as one of the ‘greats’ in Kansas City history.

Upon his death, many were saddened by the loss. “It is hard for those who knew him to realize that the blithe spirit that was Logan Clendening is gone,” the Star pondered. “No one could have enjoyed life more than he. Few have contributed more to make life sparkle for others in conversation and writing.” “It seems difficult to think of Logan as gone,” Landon Laird wrote in the Kansas City Times. “The happier imagination is that he is just around the corner, waiting to greet one with his hearty laugh and his offer of ‘Let me show you the sights around here.’” And Vincent Starrett, years later, pronounced the final word on the subject: “Logan Clendening was one of the finest human beings I ever knew.”

Kansas City Masonry/ The Masons Co is immensely proud to add the Logan Clendening Memorial Fountain to its impressive portfolio of projects. The company revels in not only being able to contribute to the historical restoration of some of region’s finest properties, but also in creating lasting tributes and timeless structures to carry Kansas City and and the city’s surrounding areas boldly and eloquently into the future.

The possibility of a future discovery in a time capsule greatly exists. Maybe the Baker Street Irregulars or Logan Clendening’s love for Sherlock Holmes will some day Reveal It…

Check us out on the web at:

Kansas City Brick, Stone and masonry restoration companies foremost function is to preserve, maintain and restore BRICK and masonry structures throughout our metro area. We view our brick masonry/stone masonry repair and MASONRY services as being greater and grander than singularly producing revenues for we shoulder a very important responsibility and essential role in safeguarding the exteriors of many of Kansas City’s masonry structures.