Dutchman (masonry) A piece of stone used to repair a larger piece, shaped such that it fills as exactly as possible a void or cavity that is to be repaired

Dutchmen repairs are useful for replacing small missing or deteriorated sections of stone. First, the area of replacement should be neatly trimmed and squared. An insert of either matching natural stone or a compatible cast stone facsimile should be cut to size and surfaced to match the existing material. 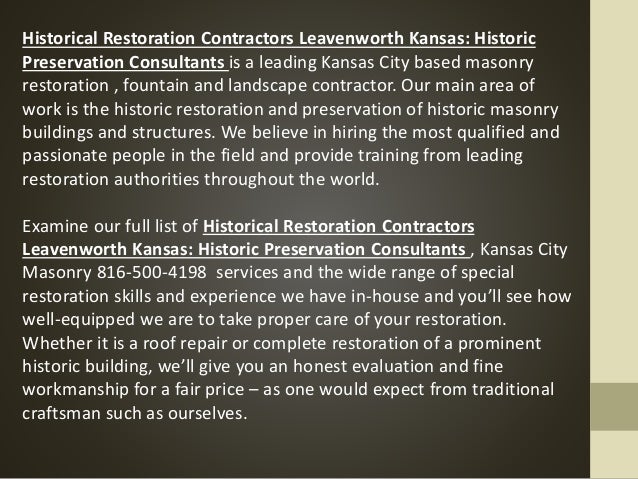 Forms of Deterioration in
Natural Stone
Depending upon the type of stone,
the climate, exposure, orientation,
building use, provision for moisture

management, and type of construction,
the causes and manifestations of stone
deterioration can be diverse.
As moisture within the wall evaporates
from the exterior face, it leaves
behind waterborne salts, which remain
on the stone surface. This characteristic
white stain, or efflorescence, is often
a result of rising damp, which occurs
when groundwater is drawn up into
the base of the wall. Efflorescence may
also be caused by moisture introduced
into the wall assembly through improperly
installed or missing flashings
at the top of a parapet.

Where efflorescence is observed,
subflorescence also may be present. As
trapped moisture migrates through

Where a portion of the stone surface
has broken away, the problem could
be delamination, exfoliation, or spalling,
depending upon the type of stone and
the nature of the break. Often caused
by freeze-thaw cycling, spalling is the
result of trapped moisture and salts
that expand beneath the surface of
the stone, forcing off a piece of the
outer face. As stone is exposed to
age and wear, the surface layer may
separate from the body along a vein,
through processes resulting from salt
crystallization. Spalling can also result
from poor repointing techniques
and from using too hard a repointing
mortar.

Delamination takes place when the
outer surface of the stone splits into
thin layers, which then peel off the
face. Sedimentary stones are naturally
prone to delamination, which occurs
along the bedding planes when the
rock is set perpendicular to the direction
in which it was originally formed.
Like delamination, exfoliation is a type
of surface disintegration in which the
stone sloughs off in very fine layers.
Although the two terms are often
used interchangeably, delamination
tends to refer to fracture along natural
bedding planes, whereas exfoliation is
usually due to thermal stress, impeded
moisture movement, or other
environmental factors.

Where a crack in the masonry unit
leads to a clean break, the fracture
is referred to as detachment.
Detachment may be due to failure of
an original construction joint, or it may
be the result of a weakened plane
within the stone.

Tracing the source of cracking in historic
stone masonry can be difficult,
as it can originate in a wide variety of
sources, ranging from structural settlement
to a repointing mortar that is
incompatible with the stone. If cracks
are narrow and short or confined to
within a single stone unit, the issue
may be relatively minor; cracks that
are wider and longer or those that
extend over large areas may be indicative
of systemic problems.

If, with light rubbing, the surface of the
stone falls away in small granules, similar
in texture to granulated sugar, the
stone may be succumbing to surface
disintegration, or sugaring. Cohesive
minerals in the stone dissolve, and the
remaining deposits are easily brushed
from the surface. Carbonate stones,
especially fine-grained marble, are
particularly susceptible to this type of
granular separation.

As the building ages, the natural disintegration
and erosion of stone due
to wind and rain leads to weathering,
which results in worn and rounded
surfaces.

Kansas City Brick, Stone and masonry restoration companies foremost function is to preserve, maintain and restore BRICK and masonry structures throughout our metro area. We view our brick masonry/stone masonry repair and MASONRY services as being greater and grander than singularly producing revenues for we shoulder a very important responsibility and essential role in safeguarding the exteriors of many of Kansas City’s masonry structures.